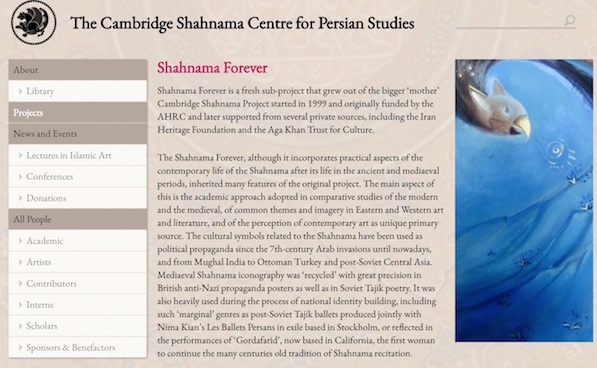 Shahnama Forever is a fresh sub-project that grew out of the bigger ‘mother’ Cambridge Shahnama Project started in 1999 and originally funded by the AHRC and later supported from several private sources, including the Iran Heritage Foundation and the Aga Khan Trust for Culture.

The Shahnama Forever, although it incorporates practical aspects of the contemporary life of the Shahnama after its life in the ancient and mediaeval periods, inherited many features of the original project. The main aspect of this is the academic approach adopted in comparative studies of the modern and the medieval, of common themes and imagery in Eastern and Western art and literature, and of the perception of contemporary art as unique primary source. The cultural symbols related to the Shahnama have been used as political propaganda since the 7th-century Arab invasions until nowadays, and from Mughal India to Ottoman Turkey and post-Soviet Central Asia. Mediaeval Shahnama iconography was ‘recycled’ with great precision in British anti-Nazi propaganda posters as well as in Soviet Tajik poetry. It was also heavily used during the process of national identity building, including such ‘marginal’ genres as post-Soviet Tajik ballets produced jointly with Nima Kian’s Les Ballets Persans in exile based in Stockholm, or reflected in the performances of ‘Gordafarid’, now based in California, the first woman to continue the many centuries old tradition of Shahnama recitation.

Three years ago on the initiative of the Shahnama Project, Cambridge waved the flag of the Millennial celebrations of the Shahnama by presenting an exhibition at the Fitzwilliam Museum of some of the magnificent masterpieces of illustrated manuscripts and artefacts from British collections. The show, which was supported by the Iran Heritage Foundation and other sponsors, opened on 11 September 2010. It was curated by Dr Barbara Brend and initiated by Professor Charles Melville. Among the contributors to the exhibition catalogue was the founder of academic Shahnama studies in the West, Professor Richard Davis, and Dr Firuza Abdullaeva, who in those days were teaching Persian literature at Ohio State and Oxford University respectively.

The Princes Foundation in London hosted a mirror show of the Shahnama in contemporary art. This exhibition was conceived and curated by Fatema Zahra Hassan-Agha of the University of Sharjah, who had previously worked as a research assistant on the Shahnama Project. Compared with the Fitzwilliam exhibition, the London show was truly international: most of the artists represented Iran and Persian art (Fereydun Ave, Siamak FIlizadeh, Malekeh and Nada-Dana Haeri); there were, however, artists from different traditions – from India (Anindita Bhatacahriya), Pakistan (Mudassar Manzoor, Saima Ali, Sarah Malik, Naheed Fakhar, Um Durrani and Imran Channa) to Russia (Sergey Feofanov) and Australia (Michal Gilikson and Khadim Ali). The works presented were executed in various techniques: from traditional oil painting to digital collages and sculpture. The artists ranged from the famous and mature to the young and so far not well known, but all allowed their talent to shine in the rays of the eternal glory of the Shahnama. The catalogue, published due to the efforts of Zahra Hassan Agha and her colleague Manfred Milz, included not only the works exhibited in London but very insightful essays by a group of academics and artists, including Charles Melville, Uzma Durrani, Suroosh Irfani, Firuza Abdullaeva and Saqib Baburi.

The recent endowment generously donated by Bita Daryabari allows us to expand the spectrum of activities not only to the purely academic study of the contemporary perception of Persian classical literature and art, but to participate in multidisciplinary projects combining different genres and styles in literature, music, dance and visual art. Among the events produced as part of this project was: the premiere of Hossein Hadisi’s ballet Zahhak: Dragon King of Persia” – contemporary music and dance performance, a new stage work based on Ferdowsi’s Shahnama.

There have been the first three contemporary art exhibitions in the series Shahnama Forever. The first one ‘Imagining Shahnama in the 21st Century’ was curated by Veronica Shimanovskaya. It was not only a continuation of the previous memorable and highly successful Shahnama shows, accompanied by concerts, recitations and lectures for specialists and the wider public as well as children: it is a part of a new initiative of the Centre to start a regular series of artistic and cultural events dedicated to the Shahnama and its world, which we hope will inspire many artists from Iran and abroad to join us in the future.