Imagining Shahnameh in the 21st Century 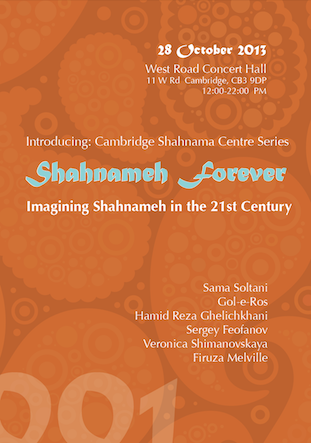 3T hree years ago Cambridge joined the world celebrations of the Millennium of the Shahnameh in the version of Ferdowsi, thePersian hereditary aristocrat who for half his life was writing his bible:a legendary, heroic and romantic chronicle of his country since thecreation of the world until the Arab invasion in the 7th century.Ferdowsi’s cult poem Shahnameh, which can be translated as the ‘Bookof Kings’ or ‘King of Books’, is a work of mythology, history, literatureand propaganda: a living epic that became a symbol of nationalidentity. Hundreds of luxuriously illustrated manuscript copies of thetext exist in museums and libraries throughout the world. Some of themagnicent masterpieces from the British collections were displayedat the Millennium exhibition at the Fitzwilliam Museum, which wassupported by the Iran Heritage Foundation and opened on 11 September2010, curated by Dr Barbara Brend and initiated by the Director of theCambridge Shahnama Project, Professor Charles Melville. The Prince’sGallery hosted a mirror show of the Shahnameh in contemporary art,curated by Fatema Zahra Hassan-Agha of the University of Sharjah, aformer research assistant on the Shahnama Project.The current exhibition “Imagining the Shahnameh”, is curated byVeronica Shimanovskaya in collaboration with and organised by theCambridge Shahnama Centre at Pembroke College, established dueto the generous support of an endowment by Bita Daryabari. It is notonly a continuation of the previous memorable and highly successfulShahnameh shows, accompanied by concerts, recitations and lecturesfor specialists and the wider public as well as children: it is a part of anew initiative of the Centre to start a regular series of artistic and culturalevents dedicated to the Shahnameh and its world, which we hope willinspire many artists from Iran and abroad to join us in the future. The modest contemporary art exhibition at the Cambridge UniversityWest Road Concert Hall is brought together to support Hossein Hadisi’s“Zahhak: Dragon King of Persia” – contemporary music and danceperformance, a new stage work based on Ferdowsi’s Shahnameh. Weare grateful to the Iran Heritage Foundation for their kind support of bothCambridge events.

Head of the Cambridge Shahnama Centre