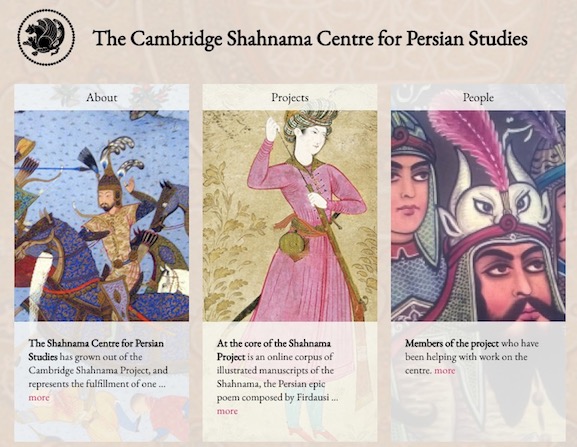 The Pembroke Centre for Persian Studies has grown out of the Cambridge Shahnama Project (currently 1 Fitzwilliam Street, Cambridge CB2 1QH), and represents the fulfilment of one of the original aims of that project, to promote Persian studies in Cambridge and the UK more generally.

Its start is associated with the opening of the Shahnama exhibition at the Fitzwilliam Museum in 2010 to commemorate the millennium of the completion of the Persian national epics, so strongly associated with  Iranian cultural identity.

The recent endowment made by Mrs Bita Daryabari to Pembroke College, Cambridge, in recognition of the work of the Shahnama Project, makes its enhancement and development sustainable for the foreseeable future. At the same time it affirms the College’s commitment to Persian studies and the support for a tradition of academic leadership in the field that includes among its past luminaries such Pembroke scholars as E.G. Browne and A.J. Arberry.

While work on the Shahnama Project and completion of the database will continue to be one the main aims of the Centre’s activity, a number of new initiatives are planned that broaden the scope of its research (e.g. the sub-project “Literature, Art, and Diplomacy in the early Qajar era”, sponsored by the British Institute of Persian Studies), emphasising the continuing importance of the Shahnama and its world today, and promoting Persian studies more widely through a programme of conferences, lectures and outreach events. In October 2013 as part of the Centre’s outreach programme there was a performance of “Zahhak, the Dragon King of Persia”, on the initiative of the young Cambridge composer Dr Hossein Hadisi (http://www.cam.ac.uk/research/news/enter-zahhak-dragon-king-of-persia).As part of the sub-project “Shahnameh Forever”, the Centre has already held three exibitions: ‘Illustrating the Shahnameh in the 21st century’, ‘Shahnameh: Time forward’, and a one-day exhibition on the occasion of the official inauguration of the Centre, curated by Dr Veronica Shimanovskaya.

Due to joint research activities, the Centre has established fruitful relationship with several instituions in the UK, Iran, Georgia, Russia, Kazakhstan, Latvia, Lithuania, and several other countries.

The most recent exhibition on the contemporary perception of the Shahnama (“Shahnameh, the perpertual narrative”) was organised by Nazila Noebashary and Akram Tavana at the Aaran Gallery in Tehran in early March 2016, accompanied by a catalogue with an introduction by Dr Firuza Melville (available to download here: http://persian.pem.cam.ac.uk/sites/persian.pem.cam.ac.uk/files/uploads/events/files/Shahnameh%20The%20Perpetual%20Narrative.pdf).

The latest one-day conference “Islamic Art at Cambridge: Lifting the Veil” was organised in Pembroke on 20 June 2016 jointly with the Department of Middle East Studies, the Department of the History of Art, and the Fitzwilliam Museum. It aimed to celebrate the resources of Cambidge in this field, related both to the museums and libraries collections, and the achievements of local experts and former students.

The Centre is acquiring an excellent library of books and other publications, both printed and digital, on Persian and Islamic art as well as works devoted specifically to the Shahnama, which started to be catalogued with the help of Dr Peyvand Firouzeh and is currently being conitnued to be put online, and available for the users outside Pembroke. We welcome visiting scholars to come and make use of these and other resources available.

The Centre was the home for the new three-year Fari Sayeed research fellowship which included a teaching programme in Islamic art history to undergraduates enrolled both in Oriental studies at FAMES (Faculty of Asian and Middle Eastern Studies), and the Department of History of Art. Pembroke’s first Fari Sayeed Visiting Fellow in Islamic Art, Dr Ünver Rüstem, was appointed in October 2014 and offered two very successful courses on Orientalism and Text and Image in Islamic manuscripts. He has now moved on to a full-time post at John Hopkins University in Baltimore. He was replaced for one academic year by Deniz Turker, who was completing her PhD at Harvard.

Dr Rüstem helped to establish a new lecture series, Cambridge Lectures in Islamic Art (CLIA), under the auspieces of which many lectures by prominent colleagues from various museums and universities have been given (http://persian.pem.cam.ac.uk/news-and-events/lectures-islamic-art).