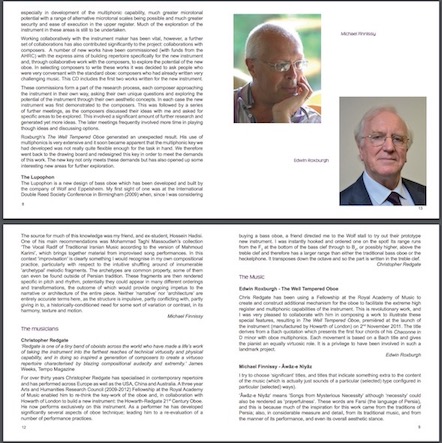 I try to choose ‘significant’ titles, and titles that indicate something extra to the content of the music (which is actually just sounds of a particular (selected) type configured in particular (selected) ways).
‘Âwâz-e Niyâz’ means ‘Songs from Mysterious Necessity’ although ‘necessity’ could also be rendered as ‘prayerfulness’. These words are Farsi (the language of Persia), and this is because much of the inspiration for this work came from the traditions of Persia; also, in considerable measure and detail, from its traditional music, and from the manner of its performance, and even its overall aesthetic stance.

The source for much of this knowledge was my friend, and ex-student, Hossein Hadisi. One of his main recommendations was Mohammad Taghi Massoudieh’s collection ‘The Vocal Radif of Traditional Iranian Music according to the version of Mahmoud Karimi’, which brings together material from improvised song performances. In this context ‘improvisation’ is clearly something I would recognise in my own compositional practice, particularly with respect to the intuitive shuffling around of innumerable ‘archetypal’ melodic fragments. The archetypes are common property, some of them can even be found outside of Persian tradition. These fragments are then rendered specific in pitch and rhythm, potentially they could appear in many different orderings and transformations, the outcome of which would provide ongoing impetus to the narrative or architecture of the entire piece. Neither ‘narrative’ nor ‘architecture’ are entirely accurate terms here, as the structure is impulsive, partly conflicting with, partly giving in to, a historically-conditioned need for some sort of variation or contrast, in its harmony, texture and motion.